A couple months ago this post went up: The Chinese are Coming: More and More Chinese Suppliers are Selling Direct to Consumers. It struck a chord with a

lot of people and was shared across a number of websites.

A friend of mine was recently laid off by a very large pet product manufacturer in China that in late 2015 tried to hop aboard the Selling on Amazon bandwagon. In just six months they managed to lose over $500,000. My friend was kind enough to share the Profit and Loss (P&L) statement for the last 6 months so we can see just how and where this company screwed up. Here’s the story of how one Chinese Supplier fled the American ecommerce market with their tail between their legs.

The Company and its Losses

The company in point was a manufacturer of pet supplies based in China. The owners of the factory sell to many very large stores world wide and have for some time. Seeing the boom of ecommerce in America and the easy ‘Amazon money’ they wanted to get in on it for themselves. They launched a new brand, opened an office in San Francisco, and hired many staff, one of whom was a friend recruited from another company. They began selling in the beginning of 2016.

The company, on the surface, appeared to be doing quite well. By June they had amassed over $300,000 in sales. Their gross margins appeared to be very healthy: they sold everything at a 300% markup, meaning if they bought a doggy chew toy for $10 they sold it for $30.

But all was not good. In July, my friend and nearly all of the staff got layoff notices. The Chinese company was shutting its doors. A quick look at the Profit and Loss Statement revealed why. 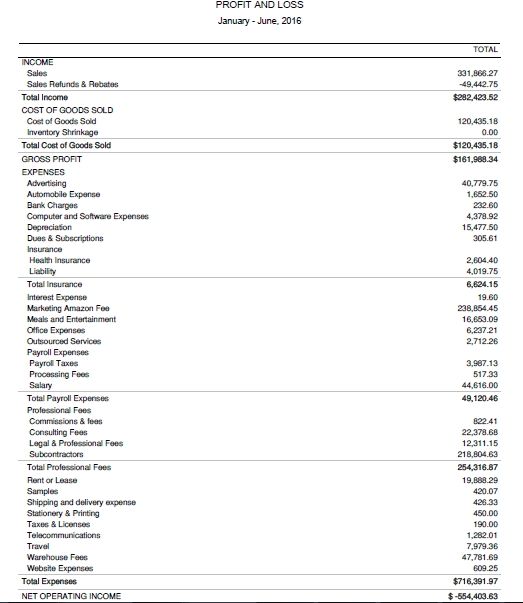 This Chinese Supplier screwed up running a private label business on a scale and speed I’ve never seen before. But all of their critical mistakes are mistakes I’ve seen many other importers and private labelers making – including myself! Looking at the P&L we can see there are three primary causes of this company losing over $500,000 in 6 months and some important lessons we can all take from them.

Paying too Much Attention to Gross Margins

This has to be one of the top mistakes I see almost every new importer making. They assume that if they can buy a widget for $10 and sell it for $20 they have a home run. What often happens is that this importer will start selling these products and will be plugging along nicely. Lets pretend they’re selling 300 units a month on Amazon. They expect to have $3000 in profit each month(300 units x $10 profit) OR if they’re really smart, they assume they have $2100 in profit ($3000 minus 15% of Amazon fees on gross sales). All the while they’ve ignored the cost of inbound and outbound freight to Amazon, duties, customs broker fees, freight from the port, inventory shrinkage, software product subscriptions, etc. It’s a classic example of not seeing the forest for the trees.

The problem is that it’s really hard to calculate in your head all of the variable expenses with a product, let alone trying to attribute fixed costs. It’s too easy to fall into the trap of seeing that “Sold, ship now:” email from Amazon, looking at the “Your earnings” number, subtracting your product cost and thinking “Chaching chaching $$$!!!”.

Paying (and Over-Paying) Others to Do Work for You

Almost all successful (re: profitable) ecommerce companies are extremely nimble. The existence of Amazon, Shopify, Adwords, etc. is predicated on being easy enough for the average Jane to use. If you need to hire outside help to do jobs that your competitor is doing themselves, you are either a) going to be higher priced or b) you’ll be unprofitable.

Here’s how to solve this problem: if you’re just starting your private labeling company, at a bare minimum, you should be able to upload your products to Amazon, take photographs of your products, write reasonable descriptions, setup a Shopify store or other website, and manage a basic advertising account with Google or Facebook. Resist the urge to use freelancers when starting your business like a recovering alcoholic has to resist a beer at an open bar wedding.

This Chinese Supplier had two costs of advertising and marketing: advertising costs via Amazon Sponsored Ads and free product give aways in an effort to generate product reviews.

Online advertising is a lot more granular and attributable than previous forms of advertising like television and print. Subsequently, most online marketers have a better grasp on advertising costs than many other expenses yet its still a cost that can get out of hand. Part of the problem lies in the fact that often advertising is attributed as a percent of sales, i.e. Amazon Sponsored Ads reports your conversion costs as an Average Cost of Sale (ACoS) meaning that if you spent $5 in advertising to generate $100 in sales, your ACoS is 5%.

This company’s other major marketing expense was on product giveaways to help generate Amazon reviews. They were giving away dozens of products a week. Ideally, such giveaways are a one-time expense until the product has some traction. But these promotional marketing strategies come in other forms too, largely in the form of sales and discounts. Sales and discounts are difficult to spot in your financial statements as they’re normally not a ‘line item’ – they’re simply hidden in reduced revenues.

How to solve this problem: Always think of your advertising costs as a percentage of your profit, not of revenues. Don’t run unprofitable ads just for the vanity of generating sales. The same goes for sales and discounts- don’t assume you can make up for decreased margins with higher volume. Ensure the numbers make sense.

The losses of this Chinese Supplier were at a larger scale and occurred within a shorter time frame than losses experienced by smaller businesses who are guilty of making similar mistakes. However, the mistakes they made are nearly identical to those mistakes that other private label businesses routinely make. Hopefully this summary of their failures and losses will help prevent others from making similar mistakes.

What’s your take? Have you made any critical mistakes in your business? If so, please share in the comments section below.